How Charisma Changes a Room with Mario Rodriguez

In the conversation, Mario Rodriguez, aka “DJ King Size” the harmonica playing owner of Mario’s Music Company in Clinton Township, Michigan talks about what it takes to be a successful DJ. How charisma plays an important role that can make or break a party in seconds.

Charles: What do you think brides typically look at when they’re looking for DJs?

Mario: I think a lot of brides are sold, of course, on the personality, which is very important. Personality is a strong attribute for a DJ. When it comes to equipment, I think brides just want to make sure that it looks okay, that they’re going to get some lights, and that’s a whole another story when it comes to lights. You want to make sure that they get some decent lights. A lot of times, it’s nice for you to try to work out a meeting with the DJ at a venue.

Mario: Can I come by and see you at a wedding? I can work that out, usually, because brides understand that other brides want to see what they’re getting. Often times, you need to set that arrangement up. I would highly encourage brides to do that. Some will say, “Well, that’s an unprofessional DJ who allows you to come see him at a wedding.” I could see it both ways. I can see what that DJ is saying. However, I think the importance of you seeing what the DJ look and listen with your ears, your ears won’t lie to you.

It may not tell you that it has a better driver of … You may not know the component or the dBs or the SPLs, but you will know by the sound of it if sounds good or not. Often times, your ears won’t lie to you. They’ll say, “That sounds good.” Usually, it’s because the DJ took the time and bought a higher end speaker like a JBL or a EV. I love EV. It’s my number one choice. They’re a great speaker. When you hear them, you can tell. When you lift them up, you can tell, because they’re heavier than many other speakers, but a bride’s not going to know that.

Mario: I think this conversation is good to have with a bride to educate them on what makes equipment good. Number one, you want to make sure that it sounds good, so try to hear it if you can. A video does help quite a bit for you to catch a little bit of the personality atmosphere. Can he make the dance floor happen? Now, I mean, there are certain families that I’ve had in the past where they’re more of a slow dance family, or they’re … There’s no kind of magic potion that you can play that’ll get them to dance. However, most wedding, I would say 98% of the weddings that I do, they’ve come to party, and I can get them out there. Most of the night, it’s going to be an epic night.

Charles: Right. Now, that’s another equipment too that a DJ has is himself.

Charles: You got the speakers. You got all the equipment, but does the DJ that you’re bringing into your venue, does he have the charisma to perform?

Mario: Often times, a lot of DJs will, when things are … When the dance floor is empty, they get more quiet. When really, that’s the opportunity where you need to fight your own natural response and actually talk a little bit more.

Charles: Nobody else is.

Mario: Nobody else is either, exactly, exactly.

Mario: Very true. Yeah, it takes some charisma, some God-given talent, as well as some training. I mean, there’s definitely some DJ training that I’ve gone through and different phrasing and wording and lingo that you can learn over the years. All that comes into play for sure. It’s a wonderful experience to be a DJ. When you have the good equipment, when you have the good lights, and you have the complete package, that’s when you get the referral.

Over the years, I’ve noticed that I used to do bridal shows my first four years, and I haven’t done a bridal show in about, goodness, since 2001. It’s all been word of mouth. When you have the whole complete package … It is important, music is important, but even now, with the DJs that do take and steal the music, or for a better … Well, stealing is just straightforward, but the people who get the free music or whatever, and sometimes they don’t listen to it sometimes, and it can be a disaster.

Not only that, but you can have access to every song in the world, but if you don’t know what to play next, if you don’t have an idea of, “Okay, this crowd responded well to Billie Jean, I should probably play Boogie Shoes or I should probably go this direction,” or “Okay, this crowd is not responding to any oldies at all, let’s move to this, or let’s move to that,” depending on what era it is.

Then of course there’s the classics that make every wedding great, but sometimes, the classics won’t work for a certain crowd, and you need to learn how to adjust and not fall apart, and that all comes with experience. You could have the best equipment, like you said, but if you don’t know what to do next-

Mario: Right. Right. It’s experience of many, many weddings and being in that situation multiple times, knowing what to do next. Sometimes, it’s cutting a song short and bringing another song on and you not recognizing that within 30 seconds sometimes can really put a damper on the groove, on the feel, on the atmosphere of that wedding. It can be sometimes a 30-second or less adjustment that can really make or break a night.

Charles: Yeah. That’s something that a bride really needs to take into consideration when they’re actually meeting the DJ that’s going to be at their wedding is that, does this guy have the personality to carry the floor?

Mario: Very true. Very true. It’s nothing more satisfying than seeing a full dance floor, of course, to the bride and to me, and of course, to her family. Then, at the end of the night, when they come and shake your hand or give you a hug, and the mom’s friending you on Facebook, like what happened at the last wedding, and them handing you a nice little tip or something, that’s always a rewarding feeling.

Then being able to tip my assistant and say, “Hey, good job. It’s a great night, and did you feel the energy on the dance floor tonight?” It’s just something great to talk about. Then, of course, if you’re talking about it, other people are talking about it, and that’s how we get those referral calls coming in. It’s a great business. We love it. Also, when it comes to bringing two people to the wedding, there should definitely be two at a minimum. In our instance, we have three, often times, because we have one who’s-

Mario: Well, one emcee, one DJ, and perhaps the person who does the media for you. As I emcee and walk around with the microphone, as I greet the bridal party as they arrive to the wedding reception hall, because the bride and groom and the bridal party, they’re taking pictures while the guests have arrived, so I hit play on the music when the first guest walks in. Often times, that’s 10 minutes, 15 minutes before the contractual time I’m obligated to start, but being a professional DJ, you want people to have an atmosphere of the reception. The music sets that atmosphere. You hit play when the first person walks in. You want to make sure your DJ does that and is sensitive to that.

Then you want to have … In my case, I have my assistant. He mans the booth while I walk around with the wireless microphone. He adjusts the mic levels, so when we do the grand entrance song, it’s usually a really hyped song, he cranks it up. When I talk, he brings the volume down so we can hear the name of the bridal party or the names of the bride and groom, the names of the ring bearer and the flower girl. Then he cranks it back up in between. Then we do the next name. Someone needs to man the sound booth while you’re walking around with the wireless microphone.

Charles: At all times.

Mario: At all times.

Mario: That’s why it’s so important to have two people. Yeah, there are certain remotes where you can do certain things, but it’s so difficult for you to focus on the task of saying the first and last names right, which I love to do, of lining people up and maintaining the volume. You may not even be in the room. You need somebody who’s in that room who does that. Then you walk to the head table with the wireless microphone for the toast while he adjust the music for that. Then when it’s time for the cake cutting, you lead the bride and groom to the cake. You announce the cake cutting, and then my assistant plays the song for the cake cutting.

It’s very important to have two people at a minimum. Often times, people who will quote you a price, usually when they give you a package price, their base price is for one DJ, for one person. It makes a big difference. When you get Mario’s Music Company pricing, it’s always a minimum of two DJs.

Mario: Two people, a DJ and an emcee. You’ll always have that. Then when it comes time for requests, the importance of having two people is one person, my assistant takes the request while I man the booth and play the music to keep the dance floor alive. I may be reading, like I said, that 20 to 30-second situation where I need to make a quick adjustment. You don’t want to be focusing your attention toward that 20-second decision and at the same time trying to think of what song would be next. That’s why it’s important to have somebody taking request while you focus on the dance floor.

Charles: He’d be your mascot.

Charles: It looks like. Yeah, put him as one of the employees. 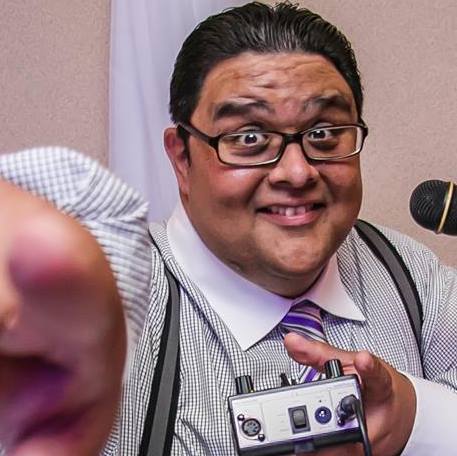 Mario Rodriguez is the owner of Mario’s Music Company, a wedding & corporate event DJ located in Clinton Twp., MI. He’s been involved in the music industry since he was 15 years old. Mario has traveled the world sharing his talent with audiences. He currently resides in Southeast Michigan with his wife, son and dog Macho.

Mario’s Music Company is about you! They want your event to have your touch and personality, so they like to meet with you personally and find out what your dreams are. Their Disc Jockeys or Live Band will be sure to make your evening memorable.